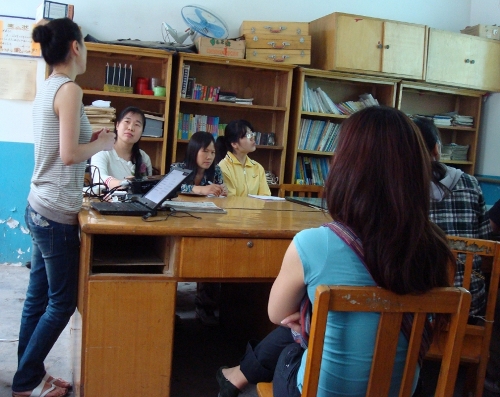 A few months ago, we had a chance to go to Wende School and met the headmaster and all the teachers over there on a Saturday morning. After the training, they asked a lot of questions and I got a very good impression about the school as they are very interested by the concepts we promoted.

Schoolwise, it is similar to a lot of other Migrant schools here in China. Many of the schools exist in conditions of absolute poverty and lack qualified teachers or administrators. They have very scarce equipment as well. Wende school has about 250 students (aged 6 to 12), 15 teachers and 10 classrooms without any laboratory, computer classroom or library. Wherever this is true, it remains unlikely that migrant children will receive an adequate education.

Unlike other headmasters I have met so far in other Migrant schools, most of them are
migrant workers themselves, they are usually some individuals taking opportunity to profit from a huge potential market due to the increased demand from migrant workers for education. Hence they would only see computers as tools to recruit more students for their schools without caring so much about the education side of the whole thing.  They tend to have some second hand unusable computers to put in a room as display. However, Mr. Cui, Headmaster of Wende, previously worked as System Administrator taking care of computers and networks in companies. He is very open minded and understands that the benefits of introducing computers to kids not only for the sake of just learning how to use computers, but to use them as tools to solve problems and widen the scope to other educational domains as well.

Since then, we went back to Wende School a few times to discuss about their needs, sponsoring some Gdiums and developing a computer lab. Of course by doing so, it would involve a lot of preparation like:

Ones of the weaknesses of Open Source in Education is lack of knowledge of Open Source from teachers and lack of documentation (especially in Chinese). Microsoft is perceived as “free” software here and all the public exams are based on Microsoft software in China while  their strategy is to give away textbooks to poor schools to make sure their market domination remains.

In order to have schools understand Open Source, we spent about 6 months to talk with schools and teachers to deliver a solution that covers their IT teaching needs but also Maths, Geography, English, Chinese, Art, Music, Typing, Office Suite, Internet and so on. Based on those requirements, we customized G-Linux and built a classroom server using applications like Gcompris, Rur-ple,  K-Geography, Stardict, OpenOffice.org, etc.. We also built  the training materials (in Chinese) and finally published our first release of Greenboard Open Textbook. All the contents is freely available on the Greenboard wiki pages and licensed under Creative Commons. Here I would like to thank the whole team including Julien Forgeat, Jason Wu, Frederic Muller, Helen Wang, SunLianTao and SunLiWen who have been constantly contributing to this meaningful project!

This article is getting too long to read so I will stop it here for now! In part two, I will talk about the installation / set up of the computer lab and training. In this trial, I hope that we can all learn together whether they are problems or useful tricks. Looking forward to the success in bringing computers with Linux and Open Source Software to Migrant schools in China.